The Commemorating Augustus project began in earnest on 27th January 2012, when I took 45 students from my Augustus and his Legacy module down into Leeds city centre to question members of the public about their views on Roman emperors. For the students, this was a chance to set what they had been learning in the classroom about posthumous responses to Augustus into an immediate modern context, to learn how survey data is collected and analysed, and share their enthusiasm for their studies with the wider public. For me, it was an opportunity to gather some solid numerical data on public perceptions of both Augustus specifically and Roman emperors more generally – something which Classicists don’t normally have available to play with.

We had done a training session in the classroom beforehand, in which I explained the ‘battle-plan’ for the day itself, talked my students through the survey questions which they would be using, and let them have a go at role-playing the survey on each other. I would love to say that the day of the survey itself dawned sunny in bright, but in fact it was cold, overcast, and increasingly drizzly as the afternoon wore on. That didn’t dampen my students’ spirits, though. They threw themselves into the exercise with great cheerfulness and professionalism, and were soon distributed all over the city centre, administering questionnaires and giving out stickers and information sheets as a ‘thank you’ to those who had taken part. 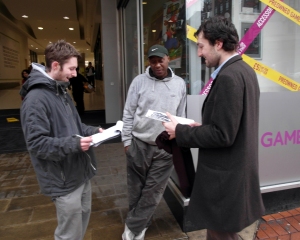 I sent out 23 pairs of students in total, each primed to conduct about ten interviews in a two-hour period, and got 221 sets of questionnaires back – some of them rather damp! – at the end of the afternoon. It wasn’t a nationwide survey, of course. We could only hope to reach people who happened to be out and about in Leeds city centre on that particular Friday afternoon, and can’t assume that the results would apply any more widely than that. But we certainly collected enough data to see some very interesting trends. We also collected demographic information at the end of each questionnaire to make sure that we were at least reaching a cross-section of the different age, gender and ethnic groups represented in the Leeds population – and post-survey analysis shows that we did that very effectively.

After the survey was completed, we re-gathered in the classroom to share our experiences of the day, and start thinking about how to analyse the data. For the students, this part of the exercise was optional. They could choose to write up a report on the survey and its findings as part of their assessment for the module if they wanted to, or they could write a more traditional essay instead. I’m glad to say, though, that a quarter of them chose to take up the survey report option. For those students, this was an opportunity to develop skills which Classics students don’t always get the chance to try out, such as scientific writing and numerical analysis. And they clearly enjoyed the experience very much, as these quotations from their reports show:

As a Classical Civilisation student, I thoroughly enjoyed being involved in this survey as I feel I have gained a better understanding of conducting a survey and I was able to learn about the public’s ideas concerning Rome’s first emperor. I was also able to communicate and educate people about my course.

Before I started collecting the data, I was apprehensive and unsure on what statistics I would find, if any at all. However, I was exceptionally pleased with how the afternoon went and with the data I collected, as well as being surprised in many ways with what I found, in reference to the questions asked, the responses given, as well as on another, more personal level.

I will keep you in suspense about the results for now, saving those for a separate post. But they were certainly fascinating, and revealed a great deal about how Augustus himself, and Roman emperors more generally, are seen by the people of Leeds. In the longer term, my aim is to run the same survey a second time after the bimillennium in 2014, in the hope of finding out whether there has been any noticeable change in public views of Augustus as a result. I hope my students on the second survey get as much out of it as those who took part in the first one.

Like Loading...
Countdown to the BimillenniumAugust 19, 2014
Suetonius, Augustus 100.1: "He died in the same room as his father Octavius, in the consulship of two Sextuses, Pompeius and Appuleius, on the fourteenth day before the Kalends of September at the ninth hour, just thirty-five days before his seventy-sixth birthday."

On This Day Two Thousand Years Ago